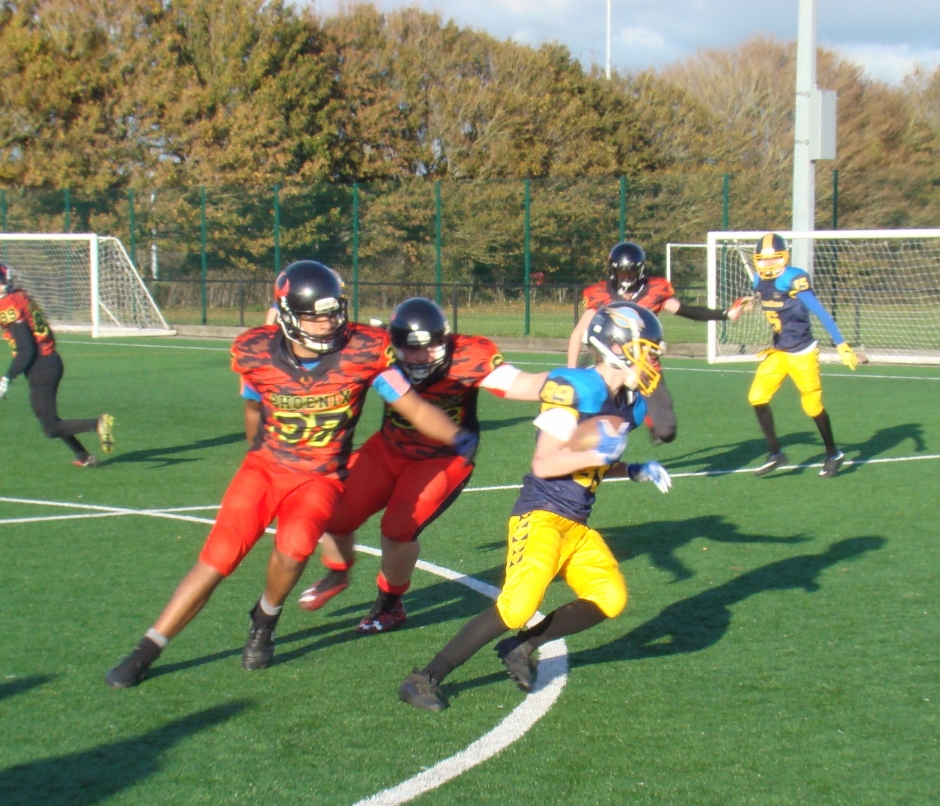 Sunday the 5th of November saw an early fireworks display at Eastbourne Sports Park, as the newly formed Hellingly HoundDogs Under 17’s contact team got its first ever run out as a team. Kent Phoenix travelled from Maidstone to Eastbourne to help give the fledgling team the taste of what to expect from contact football.

The day saw the teams go head to head over 3 practice games.  The Phoenix ran away winners of all three games but the scores were not the main reason for the event. All the games proved to be a great learning curve for the HoundDogs, as they develop from Rookies into a team.

The HoundDogs, however , found the going hard during the games. They came up against a team that had not only competed in the BAFA League in 2017, but a squad that carried more experience along with a massive height and weight advantage.

Taking these factors aside, there were many highlights for the HoundDogs on the day as the team completed several 1st downs and interceptions. The main highlights were a TD when Riley Davis caught a throw from Jacob Boorer and Harrison Kane’s 4 interceptions.

“‘The boys really stepped up in their first outing, showing no signs of being intimidated by the other side’s greater size and experience. Even short on numbers they did a fantastic job of playing both sides of the ball, showing some pretty impressive skills. Riley and Charlie had a great game with some good catches and runs. Our QB Jacob showed poise and a good arm even while under pressure. Our defence looked up to the task with 4 interceptions and can now look to refine their tackling technique. Now with their first full contact game under their belt they can build off of this and be even more ready next time.”

HoundDogs Chairman, Luke Boorer added “It was great to see the team get the chance to play and show off what they had been training so hard to do. We still have a long way to go, including player development and recruitment, but we have made a massive leap forward. We are still unsure as to what we will do with regards to a league in 2018, although we are hopeful that we will see a lot more games. We have the Christmas break approaching but are already looking and planning for next season, including scrimmage/games in a similar fashion as today. I would like to thank all the coaches who have made today possible, along with the parents who have stayed to watch their sons play this fantastic game.”