Wednesday the 15th was an unusual Wednesday for the HoundDogs teams’. Instead of mud, sweat and pains, the shirts and dresses were out as the HoundDogs players attended the 2021 end of season awards. The… More

The British American Football session is almost be over, but the Hounddogs organisation are already looking towards the 2022 season. Wednesday the 22nd and 29th of September will be dedicated to promoting Flag American Football… More 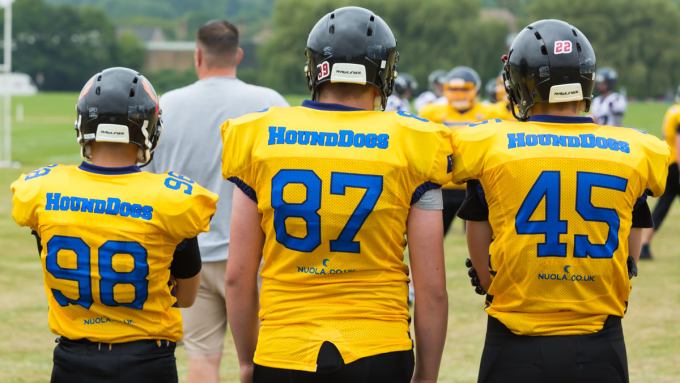 On Saturday 4th of September, Hellingly Phoenix played, a joint team of Hellingly HoundDogs and Kent Phoenix, played in the final tournament of the 2021BAFA South Division. The games were hosted at the home ground… More

The Hellingly HoundDogs would like inform all members that the 2021 annual General Meeting will take place in the Club House at Horsebridge Rec on Monday the 6th of September, starting at 7PM. This is for all player’s parents/guardians are invited. This event is the backbone of the club and leads to the decisions that are made throughout the year.

As usual, all positions are available for electing including (name in brackets is the current holder of the role):

Anyone wishing to join the Committee needs to send their “intension to stand” email to the Secretary before Midnight on Friday the 2nd of September. The email must also include why you want to stand and a brief description of why you would be good at the role that you are applying for. Please send to hellinglyhounddogs@hotmail.com


These will all be set out via the Secretary along with an Agenda, Chairman’s Report, Treasurer’s Report and profit and loss sheets to all members via Teamo.

Below is a job description of all positions and what each role entails. 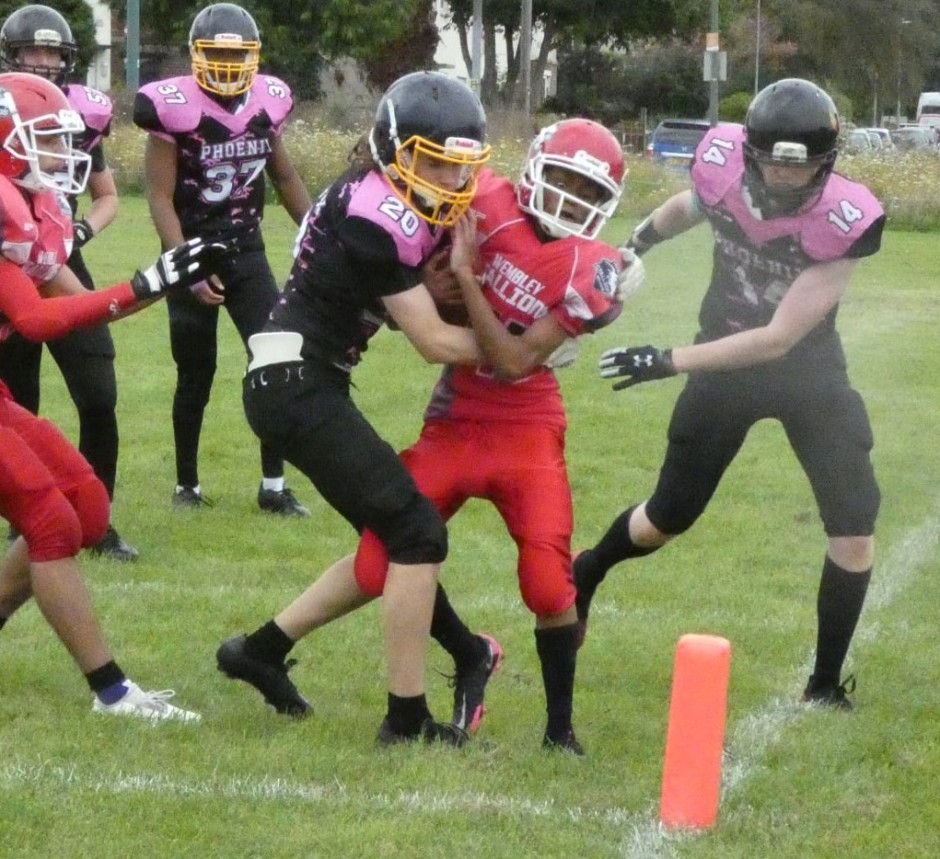 On the 21st august Hellingly Phoenix hosted the third tournament of the season where they competed against the Kent Exiles and the Wembley Stallions, unfortunately London Blitz had to pull out of the tournament because of a lack of players.

Hellingly Phoenix would sit out the first game as the Kent Exiles faced the Wembley Stallions where the score ended 35-14.

Hellingly phoenix then kicked off against the Wembley Stallions where they were looking to get the win after narrowly missing out on a win last tournament. Thanks to a strong performance from defence, Hellingly Phoenix was able to hold the Stallions to only 6 points in the entire game thanks to Lucas and Kyle Banda, who both put in strong performances at nose tackle, which kept pressure on the QB. The Hellingly Phoenix defence also held a strong lock over the run game because of strong leadership and key tackles by Sam Espie, Calvin Clark, Fin WIlson and Ryan Hedges who clamped down on the receivers. Ryan Hedges also was able to recover a forced fumble during the game. Hellingly Phoenix’s offence had one of the best games of their tournaments with a strong performance all round, Kyle Banda bullied his way into the endzone, not giving the wembley Stallions a chance to bring him down. Another amazing effort on offence by Dante furthered the score for the Hellingly Phoenix team. The game ended 16-6 to Hellingly Phoenix.

The Hellingly Phoenix organisation is wishing all players a speedy recovery and looking forward to the next tournament which is on the 4th of September as Wembley stallions host the last games of the season. 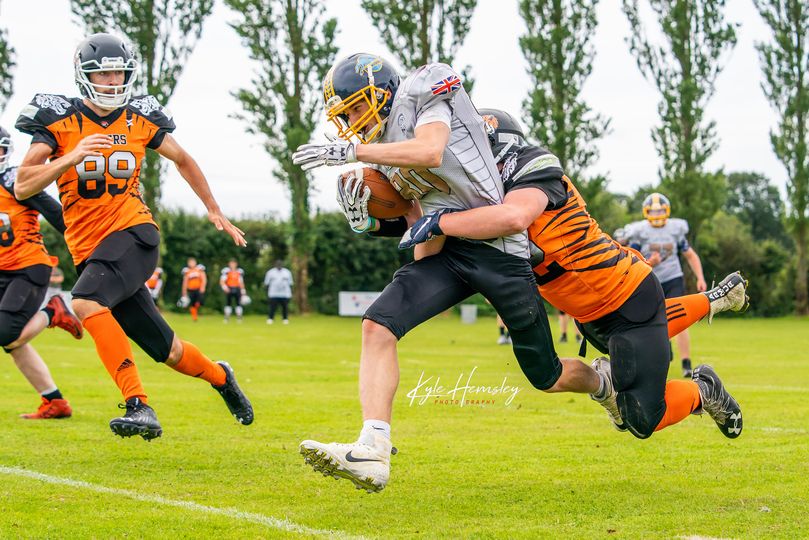 The reverse fixture between the Tigers and Legion was again low scoring, but sadly resulted in a loss for the home side. The Legion were down on numbers but put up a valiant fight on both sides of the ball against a competent Tigers team.

Due to missed assignments on back to back drives, Legion fell down 12-0 quite quickly. However, through great in-game adjustments and outstanding communication throughout the unit, the defense, led by Harrison Kane and Stan Wilson, stayed strong for the remainder of the contest. Linebacker Jake Horne arguably had the best performance on the day and was a big factor in the 55 minute shutout. Horne was a nightmare for the Tigers’ running backs and had two turnovers to his name by the end of the game. Aston Balment and Stan Wilson also had turnovers of their own.

Offensively, Legion struggled to gain much momentum but positives seen in the performances by Roman Cameron and Luke Cheeseman in the rushing attack. Cheeseman scored the team’s touchdown. Special notice should also be given to Harrison Kane and Elliot Harbidge who played “iron man” for the majority of the game, contributing on all 3 sides of the ball including positions unfamiliar to them.

Next Sunday, Legion will trek to Watford for another match against the formidable Hertfordshire Cheetahs.

Head Coach, Luke Boorer added “Today was a tough loss for all of the players and coaches a like. We started the game very badly and were 12-0 down after just a few minutes. I was proud of the players as they fought hard to come back into the game. Both teams were low on numbers because of a few reason but these were the cards we were dealt. Looking back at the game, there is a lot I would do differently. I cant fault the players and feel the loss was down to failings on my behalf. This has made me more determined to work harder to help all these kids fulfil their dreams.”

This week we saw the South East Legion square off against the star-studded Hertfordshire Cheetahs, the team’s togetherness and resilience helped them put up a good fight however the division leaders did prevail.

From the offset all the players understood that this would be an uphill battle, with the loss of starting QB Jacob Boorer and various other missing key components of the team which meant many of the players were iron manning the whole game. The Legion started strong, moving the ball downfield on their first offensive drive and shutting down the Cheetahs deadly pass game when on defence, everyone knew that they were in for a good game but by the middle of the second quarter the Legions spark was fizzling out, the offence lacking in production and the defence looking deflated, after key mistakes in the secondary. At the half the score was 28-0.

After a well needed rest the reinvigorated Legion team took the field. Spirits were high throughout. The offence saw some success in the wildcat formation with notable runs from Ovie Bazuna, Riley Davis and Roman Cameron which saw the Legion knocking on the door of the Hertfordshire end zone. The attack was thwarted not by the Cheetahs but by penalties from the Legion team itself. The defence put up a massive fight once again throughout the whole second half with notable stops from Harrison Kane and Huey Cripps. MVP of the game was Harrison Kane for displaying immense leadership skill on the field and put in a standout performance.

The Legion are out for revenge on the 15th of August, as they square off against the Thames Valley Tigers after a hard-fought draw two weeks ago. The Legion will be hosting the match at Horsebridge Recreational ground, the home of the Hounddogs with the game kicking off at 12 noon.

The South East Legion’s battle with the Thames Valley Tigers last Sunday saw the team make giant leaps forward from the loss a fortnight prior to the occasion. All of the HoundDogs on the team gave their all and played key roles in the close affair in Swindon.

With the loss of Alex “Russell” Edwards on the offensive line, the offense could have easily struggled to perform. But thanks to high quality performances across the board, the Legion were able to move the ball early and often, picking up countless first downs thanks to the dynamic running game. Hounddogs running back Roman Cameron was a big part of this deadly rushing attack. Under center, QB Jacob Boorer delivered another sterling performance once again showing off his chemistry with fellow HoundDog WR Riley Davis.

On the other side of the ball, the Legion were relentless and brutal when dealing with the Tigers offense. The first several drives saw repeated 3 and outs and not a single completion through the air whilst the Tigers rushing attack struggled to make it more than 3 yards at once. HoundDogs Stan Wilson and Harrison Kane were able to lead the defense to another impressive performance similar to the 2nd half of the last game at Wembley. Kane’s countless tackles and tackles for loss earned him defensive MVP for the game.

Next week, the SE Legion will welcome the Hertfordshire Cheetahs to Horsebridge recreation ground, home of the HoundDogs, for what will be the toughest game of the season so far.

With #Christmas getting closer, there is still time to order #Hounddogs #merchandise for that love one in your life. Order early to avoid disappointment
We are back to training
PLAYERS WANTED🏈🏈
Yesterday, @ronnie_alderman of the #HoundDogs #Committee attended the local #Horsebridge @coopuk for a celebration event and to collect a cheque as part of the #co-ops “big co-op payout”.
Our #flag and U16 contact teams are back training next Wednesday.
Last U16 tournament of the season at #Maidstone. Good luck guys #belikesol #teamwork @kentphoenix