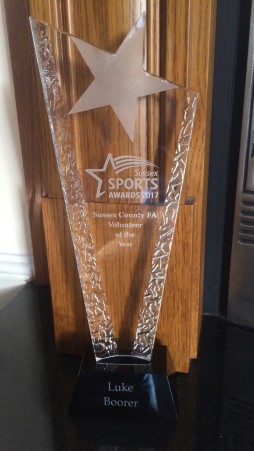 Dogs and its Chairman, Luke Boorer.

A few weeks ago, Luke found out he had been nominated for Volunteer of the Year Award at the 2017 Sussex Sports Awards which was to be held at The Grand Hotel on Brighton sea front.

The evening consisted of a sit down meal, followed by the award presentations and guest speaker. The evening was hosted by Danny Pike from BBC Radio Sussex, and he was joined on stage by winner of 10 Invictus Games medals, and hopeful GB Paralympian Mike Goody.

We're pleased to announce the winner of the @SussexCountyFA Volunteer of the Year award! Well done to Luke Boorer! #CelebrateSussex pic.twitter.com/1UhfS91Xac

Luke Boorer added “It was a complete shock. I know Eric and all he has done for sport and

Bexhill Basketball Club, and was convinced that he was going to win. When they started reading out snippets of what the winner had achieved, I still thought that it wasnt me. It was only when he read my name out, did I actually start to realise I had won. Its a real honour just to be nominated and I was excited by this fact alone. I have been to the awards night in previous years and know what a fantastically organised evening it is and how special it is for all attending. I would also like to thank all the rest of the team involved with Hellingly Hound Dogs. We have a fantastic back room including the
Coaches and Committee, who are a very dedicated team. Without them, our club probably wouldn’t exist. I would also like to say a big thank you to the team over at SEYAF, who have supported our club since the day that we were founded.  As a club, we have come a very long way in a short space of time, but we still have some amazing things to come. This is not the end of where we want to be. We want to offer the kids of Sussex the chance to play this fantastic sport and want really want to continue to develop players and turn them into a team that the community can be really proud of. ”

Happy new year to all players, parents, coaches, committee and all those that make our club a very inclusive environment for all.
We are back to training on Wednesday the 11th of January at Willingdon Community School from 7pm.
With #Christmas getting closer, there is still time to order #Hounddogs #merchandise for that love one in your life. Order early to avoid disappointment
We are back to training
PLAYERS WANTED🏈🏈
Yesterday, @ronnie_alderman of the #HoundDogs #Committee attended the local #Horsebridge @coopuk for a celebration event and to collect a cheque as part of the #co-ops “big co-op payout”.