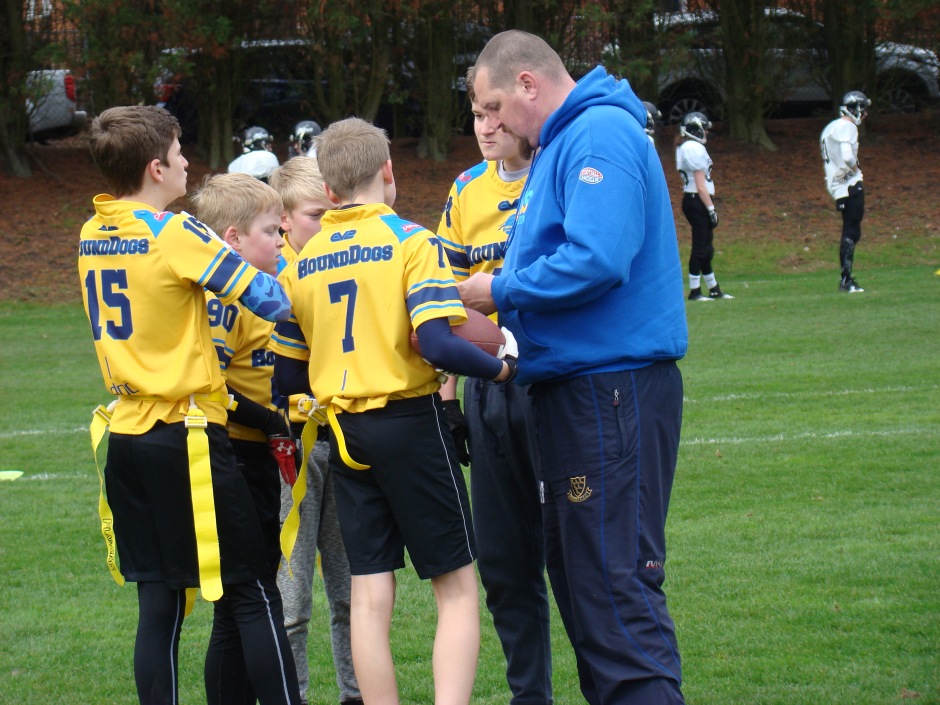 SEYAF Championship. The Hound Dogs entered two teams into the event in the U14 and U11 sections.

For the U11’s team this was, for a lot of them, their first ever chance to play on a competitive stage. The team played their only game against a team from Kent Phoenix.  Unfortunately they lost 18-12, but fought hard to earn a lot of respect from the other teams and coaches. Ben Boorer was the star of the show by scoring both of the Hound Dogs TD’s, with one of his scores coming from a run play, when the team was backed up on their own 2 yard line to score.

The U14’s team faired slightly better in their 5 game series. The team managed a draw of 12-12 to the Kent Phoenix, thanks to a last play TD when Jacob Boorer caught an off the shoulder catch from younger brother Charlie Boorer in the End Zone to earn the team a draw.

Their second game was a completely different story. The team went 12-0 down very early on against the East Kent Mavericks. Once behind, they spent the rest of the game chasing and taking some chances that simply didn’t pay off.The game finished 24-0 to the Mav’s.

Coach Luke Boorer said “The Mav’s are a good side, but the score didn’t really reflect just how well the team played. We missed some chances that, on another day, the boys would have caught with ease. Plus when you are down 2 TD’s early, you spend the rest of the game taking chances to get back in it. These chances simply didn’t pay off for us on this occasion”.

After a team chat, the boys took to the field once more, and played their first of back to back games against the Kent Exiles Wolves. The Hound Dogs returned to playing a much better standard of both offence and defence with Ned Foster leading by example on D. The hounds put 1 TD on the board thanks to Jacob Boorer with another high above his head catch.

The Hound Dogs after a short break played their forth game, and second, against Kent Exiles Wolves. This time the team turned the result around and picked up their first win of the 2017 season. The score finished at 12-6 after a successful Roman Cameron-Dick TD and another one from Jacob Boorer.

In the teams last games of tournament 1, it was an end to end affair with the Hound Dogs coming second in a 30 to 18 game. Scores for the Hound Dogs came from another Jacob Boorer TD along with scores from Ned Foster and Roman Cameron-Dick.

Coach Boorer added “It has been a fantastic day for the lads that came along to represent the Hound Dogs. We would like to thank both the Exiles and SEYAF for hosting and arranging an excellent event for all the teams. We would like to also thank all the parents, kids, Referees and helpers that make these event so great. We are very lucky to live where we do, and to have an organisation like SEYAF on our doorstep. Their work and dedication to our sports bodes very well for the future in the South East. The lads themselves showed some great skills in patches during the day, and showed just how far we have come as an organisation too. We will return to training and look to produce more quality work and hopefully start building our way up the table as the season goes on”.