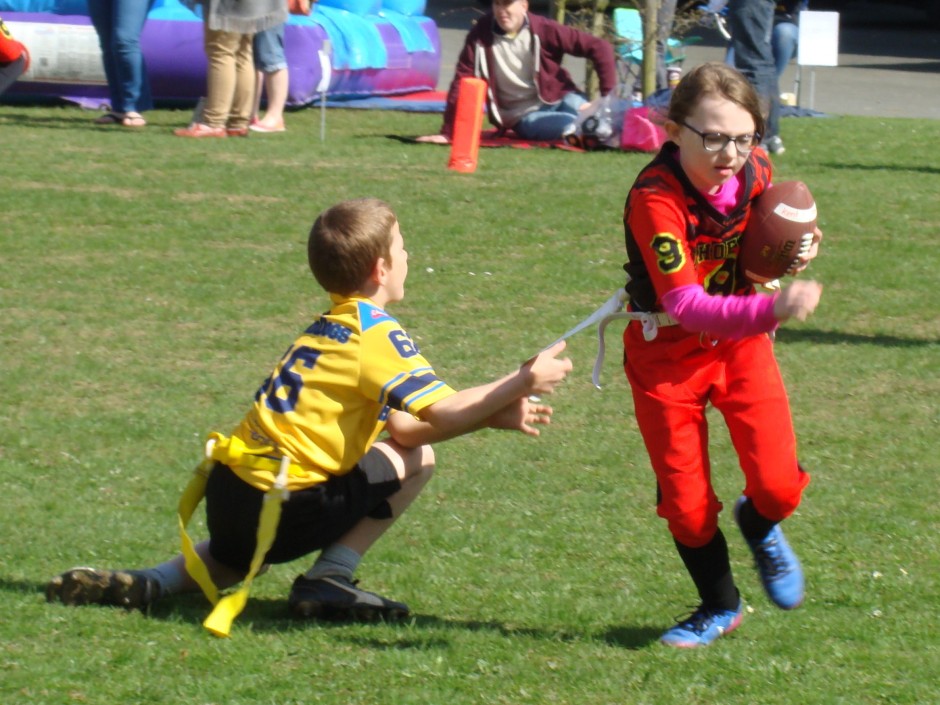 Sunday 2nd April saw the HoundDogs travel to the hone of Kent Phoenix, Cornwallis Academy, Maidstone, for Round two of the 2017 SEYAF Championship.

The under 11’s played 3 games in all and, although they didn’t win a game, they showed great improvement throughout the day.

They started with a game against a very experienced Kent Exiles team. The Cadet team struggled from the word go and ended losing using the Mercy rule, which sees the score frozen when a team is 24 points or more in front. The HoundDogs struggled to move the ball forward when on offence and didn’t fair much better on defence.

Their second game saw them play East Kent Mavericks. Again, the Mavs outplayed the young HoundDogs teams. Just like the Kent Exiles, The Mavericks are a very experienced team who have been training and playing together for quite a while. However, the HoundDogs managed to get on the scoreboard thanks to a TD from Captain Ben Boorer, as the team walked away losing by 24-6.

In their 3rd game, the team faired a lot better against an opponent as they were more evenly matched. The game was end-to-end, full of amazing running TD’s. Ben Boorer scored another TD along with Morgan Scott-Blundel, who managed his first ever TD in Flag Football. There was also some amazing defence work from new recruit Charlie Pattenden,  along with Hayden Puttick and Charlie Mullieux.

The Under 14’s team faired slightly better and walked away with a win to their name. 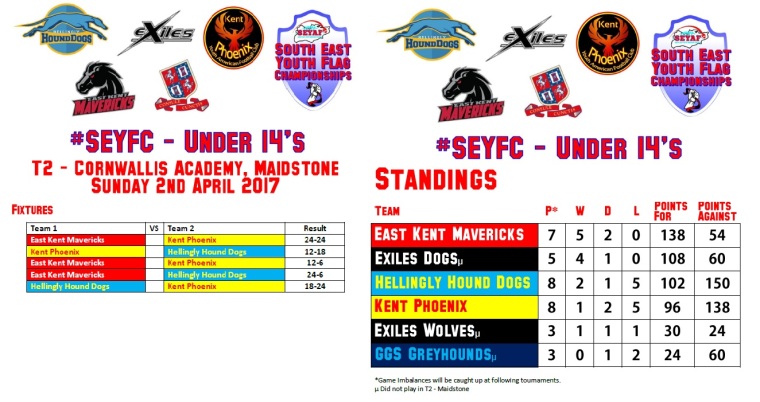 The HoundDogs’ first game of the tournament was against the home team of Kent Phoenix. An end to end tussle of offence, with the HoundDogs pipping the Phoenix by 3 TD’s to 2. QB Charlie Boorer completed two throwing TD’s to his brother Jacob Boorer, who used his height to an advantage. The other TD came from Roman Cameron-Dick from a short run.

The HoundDogs then took on East Kent Mavericks, who shut out the HoundDogs in tournament #1. The team were determined not to allow history to repeat itself and came out the blocks firing, taking the ball near to the end-zone in only a couple of plays. However, a resolute Mav’s defence stopped the HoundDogs from scoring then soon took over and opened the scoring. This was when the Dogs gritted their teeth and came back to get a score on board from Jacob Boorer scoring his 3rd TD of the day. Things then got worse as the Mav’s scored 3 more TD’s without reply in a game about the smallest of margins. The Mav’s walked away the deserving winners, with the HoundDogs licking their wounds for the second Tournament on the trot.

The 3rd game of the day saw the HoundDogs take on the Phoenix for the second time. The Phoenix got off to a flyer, utilising the height of their players and got the scoreboard rolling. The HoundDogs replied straight away with the Boorer brothers connecting again.

A quick alteration in defence saw the HoundDogs mark the Phoenix tallest player out of the game, which saw them altering their personnel to try and out think the Dogs. The Dogs then took the lead from Roman Cameron-Dick with a near side touch line run to put the HoundDogs up for the first time in the game. Back came the Phoenix twice as the lead continued to ebb and flow. The Boorer brothers then connected again to tie the game at 18-18. With less than a minute left on the clock, the Phoenix moved the ball down the field and almost crossed the line, had it not been for the heroic defence of Ned Foster who had played the whole day impeccably, making several TD saving tackles. Then the HoundDogs suffered a bitter pill as Charlie Boorer, who had out marked the Phoenix tallest player, giving him over 30 CM in height, missed a thrown ball, over his head by the smallest amount, resulting in the Phoenix scoring on the last play of the game, and taking the win.

The DPO Home Improvements Man-of-the-Match goes to Jacob Boorer for his 5 TD’s in one day.

Coach, Luke Boorer, added “Both teams have made giant strides over the last two tournaments. The U11’s have played against some very good players, who are not only more experienced but also a lot older than most of our team. The team made a few basic mistakes, but learnt a lot.

The U14’s were unlucky. They played some great offence and defence but missed out in games by the smallest of margins. But that’s football at the end of the day. We will continue to work on the skills we need to learn and come back on the 30th and put those skills into the games, and hopefully pick up a few more wins.”

The HoundDogs return to action on April the 30th for round 3 of the SEYAF Championship.

Happy new year to all players, parents, coaches, committee and all those that make our club a very inclusive environment for all.
We are back to training on Wednesday the 11th of January at Willingdon Community School from 7pm.
With #Christmas getting closer, there is still time to order #Hounddogs #merchandise for that love one in your life. Order early to avoid disappointment
We are back to training
PLAYERS WANTED🏈🏈
Yesterday, @ronnie_alderman of the #HoundDogs #Committee attended the local #Horsebridge @coopuk for a celebration event and to collect a cheque as part of the #co-ops “big co-op payout”.