Sunday was probably the biggest day to date in the short history of Hellingly HoundDogs.

Sunday, 28th May saw the HoundDogs get their chance to become hosts of the 2017 SEYAF Championships, as they welcomed three teams from Kent to Horsebridge Recreational Ground.

The ground looked perfect as teams arrived, with all 3 pitches white lined and end zone pylons basking  in sunshine. The PA system was all up and running with the sounds of “Sussex By The Sea” blaring out, along with the clubhouse TV’s displaying a complete fixture list and results page.

The games started at 11am after a minute’s silence to mark the tragic events in Manchester the week before.

The HoundDogs Cadet team, who were still awaiting their first ever win, took to the field

against top of the table Kent Exiles Stags. The HoundDogs went down 30-6, but scoring against the Stags was a feat in itself, after a couple of thumping defeats. The HoundDogs TD came from Archie Foster, who completed a fantastic 30 yard run to score in his first ever match for the HoundDogs.

The HoundDogs then took on the newly formed Kent Exiles Bucks. The game finished in a 12-all draw and equalled the HoundDogs best ever result. Both TDs came from Archie Foster, who demonstrated a performance full of speed and agility.

They then faced another very competent side from East Kent Mavericks. This game was an end to end scoring feast that also finished in a draw at 18-all. Again, Archie Foster scored 2 TDs, with a run from his own half and a thrown ball from QB Ben Boorer. The other TD came from Morgan Scott-Brundle, who carried on his fine form from the last tournament.

Next it was time to play the team that the HoundDogs are more evenly matched against,

and drew with in Tournament 3, Kent Phoenix.  It was another exciting game, and the HoundDogs ran out winners 12-0. Again, Archie Foster sealed a great day for himself and the team, as he scored both TDs and secured the HoundDogs’ first ever win. A special mention goes to Hayden Puttick and Charlie Pattenden, who both completed fine tackles to stop the Phoenix from scoring.

The DPO Home Improvement MVP goes to Archie Foster for his 7 TDs. 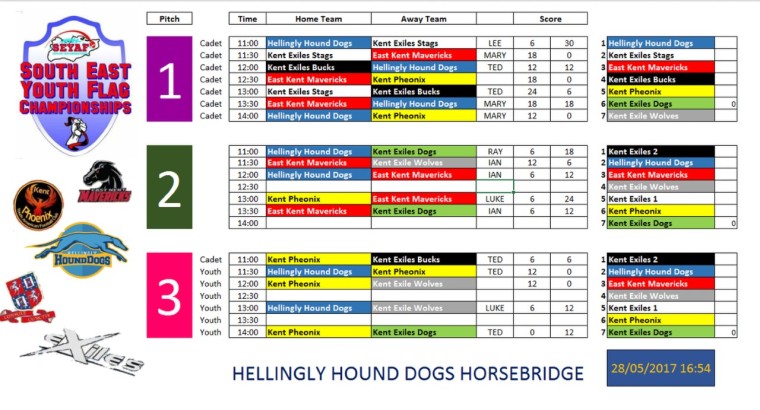 The Youth team started their day with a game against the Exiles Dogs, and lost 18-6 in this opening  game. The TD for the HoundDogs came from Riley Davis with a catch in the corner of the end zone.

They then bounced back as they took on Kent Phoenix, winning 12-0. The pairing of QB

Charlie Boorer and Riley Davis proved dangerous as the pair combined twice to score both TD’s, taking the duo to 3TD’s for the day so far.

The Youth team then took on East Kent Mavericks. This was the teams’ fourth encounter with each other, with the Mav’s winning all the other meetings. The Mav’s kept up their winning streak, as they ran out the 12-6 winners of this match. QB Charlie Boorer scored the Hound Dogs only TD with a run up the side line after the Mav’s defence decided to blitz the QB but couldn’t get anywhere near  him.

In the team’s last game they registered their 3rd loss of the day, as they went down 12-6 to

Hellingly HoundDogs Chairman added, “It was a fantastic day for our organisation. There are a lot of people to thank who helped to pull this day off. We had lots of volunteers helping to run the day, for which I thank them immensely. We also had several businesses donate prizes for our raffle, as well as parents making cakes for our stall. These two alone helped raise almost £200 for the club. I would also like to thank two of our coaches for their help on the day, in making sure the boys were ready for this event. I am very proud of both of the teams that competed and their development in the sport has been phenomenal. This is down to our coaching team, who all work exceptionally hard to help encourage the kids”.