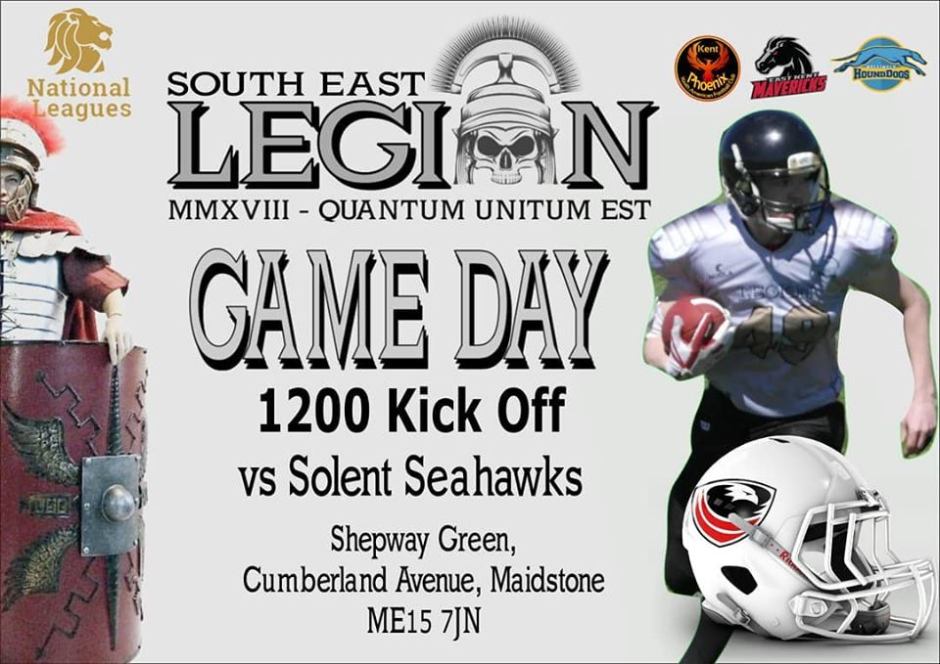 Sunday the 26th of May saw the newly formed

The game was delayed by an hour due to a mix ups with referees but the game started a 1PM as soon as the refs were on site. The Legion elected to receive the ball and got the game going with some good plays by the Offence. However, things started to not go the way of the Legion as HoundDogs QB, Jacob Boorer was picked off in the Legion’s half which lead the Seahawks player to run the ball almost to the EndZone. They soon scored and kicked the extra point to make the score 7-0.

The Legion then got the ball again, and again made some good moves as they moved the ball down field. They got stopped around the half way line and decided to punt. However, the ball didn’t travel very far and the Seahawks again capitalised on the Legion mistake to make the score 14-0. The Seahawks came again to go into the half 21-0 up.

The Legion came out still trying to push the Seahawks all the way and the team never gave up. The 2nd half was a tighter affair until the last couple of minutes when the Seahawks scored late in the second half after the Legion had moved the ball almost the length of the field , for QB Jacob Boorer to be picked off for the second time in the game after Wide Receiver Riley Davis couldn’t quite grab a pass that was tipped into the air of the Seahawks player which led to the Seahawks winning 47-0.

hard on what was going to be a difficult game. However, I really think the scoreline flattered the Seahawks play. We lost a few players early on to injury and we had several calls go against us. However that is sport and you have to overcome these issues within any game. Sometimes calls go for you and sometimes against. However I was really impressed with all the lads who never let their heads go and we played with respect and a great positive attitude. We, as coaches can install the techniques etc into the players, but only they can control themselves on the pitch and I believe all the lads showed that today with taking a knee of respect for all players whether they were Legion or Seahawks players. We will now sit down watch the game film and adjust accordingly. we would like to thank the referees after the mixup, the Phoenix staff for getting the pitch ready and a special mention to Phoenix Medical services. We had a played go down and stay down after an attempted tackle. The medics were on the pitch straight away and dealt with his injuries extremely well. We all wish Ethan the best and hope that he is out of hospital very soon and back on the sidelines with his team mates.”

The Best Of Eastbourne MVP’s Awards go to:

Special Teams MVP – Thomas Avann, always ready to go in the game and never asked for a breather. Also made a couple of good tackles to help his team mates complete the tackles.

Defence MVP – Thomas Avann, even tho thomas hardly missed a play on Defence and Special teams, he still gave 100% effort with each snap battling through tiredness .

Offence MVP – Jacob Boorer, playing starter in only his second game, he played with great control and got up and got on with the game after each hit to help his team move the ball down the field of play.