Sunday the 9th of June saw the HoundDogs take a group of players to Canterbury, the home of the East Kent Mavericks.

The event was held to offer new players some

game day experience and help develop skills that all the coaches have been installing over the last few months.

The HoundDogs started off with a game against a a very inexperienced Mavericks U12’s team. As with these events before, the game is based around development rather than going for a complete winning mentally. The HoundDogs started well with a 12-0 win thanks to Alfie Woods, who scored both TouchDowns including a pick 6 in his first ever game of American Football.

Next up was the more experienced opponents of Kent Phoenix U12’s. In past events, the HoundDogs and Phoenix have had some really close games. However, the HoundDogs run out winner this time with another 12-0 win. Again, it was Alfie Woods who scored both TD’s for the HoundDogs team.

Last up saw the HoundDogs take on a 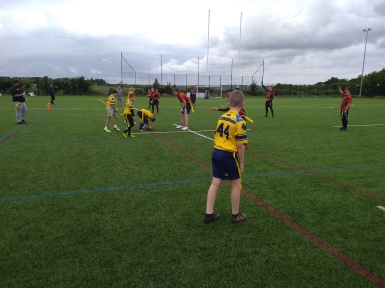 very tall Phoenix U14’s team. This game was another level for what the HoundDogs had already faced during the day. The HoundDogs moved the ball well but couldn’t quite get over the line as they lost out to the Phoenix 12-0.

Coach Luke Boorer added “We had a great day which saw a lot of the skills the players had been taught by Coaches Jamie and Ronnie at training. Don’t get me wrong, it’s always great to win games but for me on a personal level at these age groups, it’s more about developing players skills and their attitudes to sport and the opposition. We were hoping to have two teams represent the HoundDogs on the day but we didn’t quite have the numbers this time. However, we are hosting a tournament in July where we hope to have more players available.”

MVP awards
Offence MVP – Tough one but this award is going to be joint MVP. Alfie Woods and Adam Taylor both demonstrated great skills in all the games to help the HoundDogs score.

Defence MVP – Charlie Fairway. Charlie has been with the HoundDogs since day 1 and has been to every game. However, it’s only recently that he has really started to understand and read the game and this includes making numerous tackles to save the opposition scoring.